Over the past 11 months along with the introduction and mass roll-out of Windows 10 (Red), Microsoft’s most common and most used operating system Windows 7 is on a light but steady decline in market share. Part of this is likely as Windows 10 is being offered currently as a free upgrade from windows 7, (Blue) 8, and 8.1 (Purple) promoting various benefits including Cortana; the digital personal assistant along with a new sleek feeling design. This is supported also by the fact that windows 8.1, a still quite new system is also declining in market share, giving users to Windows 10. 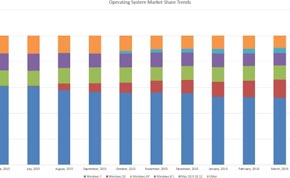 As you can see above, however, this isn’t the only trend in the last year. Not surprisingly, a significant number of computers are still running windows XP (Green) and this number seems to be completely stagnant perhaps signalling it will remain at this number for some time, which is about 7.5% of current market share worldwide.

Some of these statistics are misleading, however, as only OSX 10 and 11 are present on the graph. Previous versions are contained within the ‘Other’ category but this is likely as the updates are free to all OSX users and therefore the vast majority of users will be using the newest version as soon as it is out. This is also why the number of users tends to plateau and be constant.

We have also seen a constant number of ‘Other’ systems (Orange) taking market share, many of which are running Linux-based systems, however, it is undeniable the number of systems running very old and now unsupported versions of Windows or Mac systems. Running a system which no longer receives updates leaves you vulnerable to many kinds of attacks and exploits which will go unfixed.